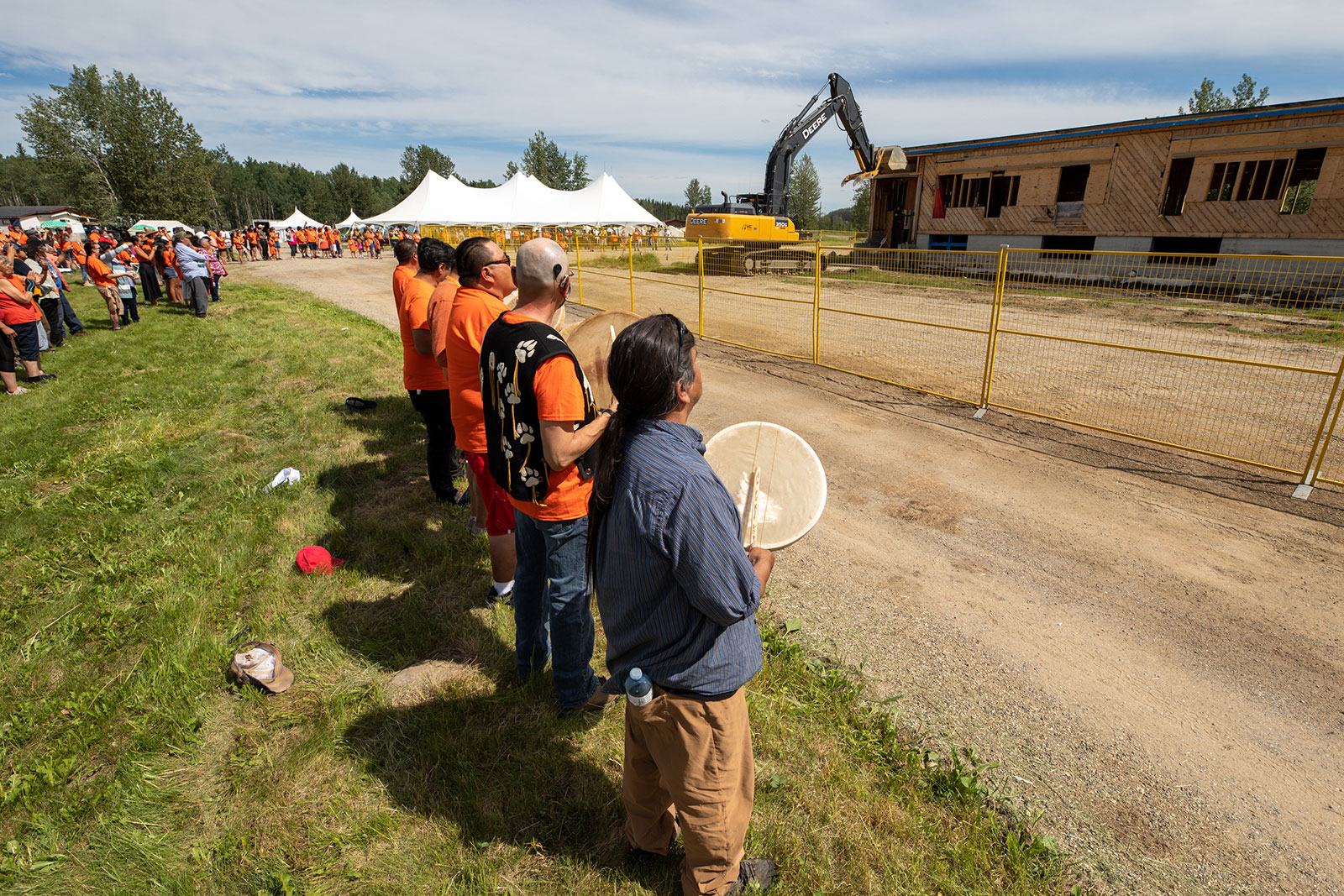 This past week the Lower Post residential school building, a source of trauma and painful memories, was demolished and the grounds blessed in ceremony to prepare for a new multi-purpose cultural centre — a space for self-government meetings, for social and cultural gatherings.
Photo by Justin Kennedy PHOTO BY MANU KEGGENHOFF /PNG

From 1951 to 1975, the children of the Indigenous Nations of Yukon and northern British Columbia were stolen from their families and sent to the residential school in Lower Post, a Kaska Dena community in B.C. at the Yukon border.

The Lower Post residential school was run by the Catholic Church. It was a place of terror and desperate loneliness, and has been a source of trauma and painful memories ever since.

To anyone who has ever visited the community of Lower Post, the fear, anger and sadness people feel about the building is palpable. For some elders in the community, having to use it as a band office has meant returning to the very rooms where they were abused by school officials, and the Daylu Dena council and many Kaska leaders — past and present — have, for decades, called for the destruction of the building.

This past week, representatives from the governments of B.C., Yukon and Canada joined leaders from the Daylu Dena council and many neighbouring northern Nations and survivors, to witness the final demolition of the remnants of the school building. The structure was razed and the grounds blessed in ceremony to prepare for a new multi-purpose cultural centre — a space for self-government meetings, for social and cultural gatherings and a place for community members to visit with one another, and to find peace and healing.

The long-term effects of residential schools cannot be overstated. Their very existence shattered the lives and communities of Indigenous peoples, separating the children from their families and all but severing their sacred connection to their lands.

For the community, the demolition removes this painful reminder for the Kaska people and residential school survivors from throughout the north.

For those of us who do not live in Lower Post or could not attend in person, this event was a solemn and significant moment. One that offers a powerful symbol of hope for the future and the promise and possibilities of reconciliation.

The Truth and Reconciliation Commission Report reminds us that reconciliation entails “awareness of the past, an acknowledgment of the harm that has been inflicted, atonement for the causes, and action to change behaviour.”

Moving forward with reconciliation does not mean forgetting events of the past, however shameful they may be. It means telling the truth of our history and learning from our mistakes, so we can build a better future for everyone. Which is why governments, churches, and all Canadians must acknowledge that what happened at the former Lower Post residential school was not exceptional, or accidental.

The recent revelations of children buried at the site of the former Kamloops and Marieval residential schools has prompted a period of national mourning and reflection.

Residential schools were part of a colonial system, maintained by government policies, whose multi-generational harms continue to be felt. The way forward to achieve true reconciliation and healing must address these systemic realities in our society.

We, as leaders, of a country, a province, and from an Indigenous nation, must together have the courage of our convictions, to act and to do better.

We must be unafraid to listen, to acknowledge the truth, and to be bold in our actions and our leadership.

As called for by the Truth and Reconciliation Commission, governments are implementing the United Nations Declaration on the Rights of Indigenous Peoples as a guide to working in partnership with Indigenous peoples.

It must be a partnership marked by reciprocity and respect, and ensure that Indigenous peoples reclaim their rightful place as decision-makers in matters that affect their lives.

It must be a partnership which recognizes and supports the sacred responsibilities of stewardship over their lands and waters, a teaching at the heart of Indigenous languages and cultures.

B.C. made history when it became the first jurisdiction in Canada to adopt the UN Declaration on the Rights of Indigenous Peoples in law in 2019. The province has released a draft action plan to end anti-Indigenous racism, and to advance self-determination and self-government, rights and title, and social, cultural and economic well-being.

It will build on work the province is undertaking with Indigenous peoples to support language revitalization, implement a new K-12 curriculum that incorporates Indigenous cultures and histories, share new revenues with First Nations to support self-government and strong, healthy communities, and build affordable housing on and off reserve.

In Ottawa, equivalent legislation, Bill C-15, has become law. This legislation is a roadmap for the federal government to advance reconciliation and a historic step toward fully recognizing, respecting, and protecting the human rights of Indigenous peoples. It will also create social and economic equality, promote economic participation, and protect Indigenous governance and laws, lands and territories, and cultures and languages.

The federal government has also put in place the legislation and support for Indigenous communities to revitalize and strengthen Indigenous languages and culture, so every First Nation, Inuit, and Métis child grows up proud of who they are, and has co-developed Indigenous child and family services legislation to ensure that Indigenous children remain with their families and communities

Such legislation is important. But it is only one step on our journey to advance reconciliation and undo more than a century of colonial, long-standing harms that must have no place in Canada’s future.

As we look back on National Indigenous History Month, let us be inspired by the leaders in the Lower Post community, who can finally put their determination and energies to new endeavours. This event is testament to their immense courage, pride in their nationhood and resilience. As Kaska Dena they will draw on their relationship with their ancestral lands and teachings to heal and to continue to make their contribution to our collective future.

Today, we remember the children who died in these institutions, those who suffered abuse, and the families whose lives were forever changed.

We must, and we will, work to support and encourage Indigenous-led solutions so that Indigenous children have the opportunity to grow up confident in who they are, rooted in their culture, language and their peoples’ relationship with the land, that they too can thrive and help build a better future for all generations to come.

Dave Porter is Kaska leader and survivor of the Lower Post residential school; Justin Trudeau is prime minister of Canada; John Horgan is premier of B.C.